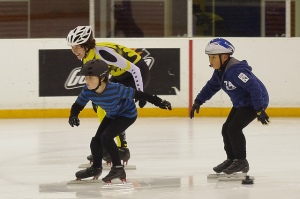 RACING
Sunday the 29th of May saw the WFIRC hold its first ever race meet. Ten skaters and the coach took part in a race program of a 1-lap time trial and three different distances.

As a first time racing for most of the skaters, it was a chance for them to post their first ever times over various distances, and also to began learning about the the rules of short track speed skating.

It was a very successful morning with some good first times being recorded. Some skaters learnt about the line dge of short track by testing out the new safety pads with unfortunate falls, but luckily with no major injuries. Many thanks to the parent and sibling timekeepers.

DUKE TROPHY
WA skaters will compete in the Duke Trophy to be held in Sydney on the 23rd and 24th of July 2011. This will be the first time that WA has fielded its own team in the State Teams event named in honour of Australian speed skater Len Duke.

6 skaters will travel to Sydney to compete in the event in which skaters accumulate points for their respective teams, and not themselves. Without a full team (24 skaters) WA will not be able to win the event, but with some of our skaters it will be great to see us win some points in particular divisions.

For all of our skaters (except Frank) this will be their first ever short track competition outside of club racing – a baptism of fire for the Western Flames IRC club members which I know they will enjoy.

Last year, Frank Anderson skated for QLD and won the Len Duke Fairest and Best award for the competition. This year, Frank gets to skate for his home state for the first time in this event and can’t wait to represent his club and state.

Good luck to all the skaters. We’ll post pics of the new WFIRC suits when we get them.

An Australian masters speed skater whose passion for ice sports can not be dulled! Join the ride through the Master years with me.
View all posts by Frank A. →
This entry was posted in Uncategorized. Bookmark the permalink.